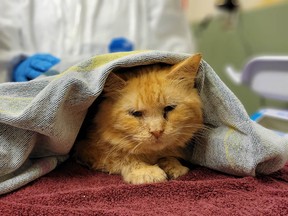 The B.C. SPCA has seized 120 uncared for cats and three Chihuahuas from “filthy and unsafe circumstances” in a trailer in Fort St. James.

“The animals, lots of whom had been emaciated and affected by higher respiratory infections, excessive flea infestations, urine scald, eye infections, dental points, ear mites and wounds” are being cared for at a number of shelters, stated Eileen Drever of the B.C. Society for the Prevention of Cruelty to Animals.

The individuals who lived within the Fort St. James trailer had additionally lived in Vanderhoof and SPCA officers discovered 130 lifeless cats in freezers behind that residence, the society stated.

“Any time we’re coping with conditions of animal hoarding, it’s devastating for each the animals and the folks,” stated Drever in a information launch. “We’re simply so glad that we had been referred to as in time to rescue the remaining animals.”

Drever described the circumstances within the Fort St. James trailer. “The entryway and hallway to the bedrooms had been lined in layers of feces, and the complete trailer was extremely popular and full of an amazing ammonia scent as a result of buildup of urine,” stated Drever. 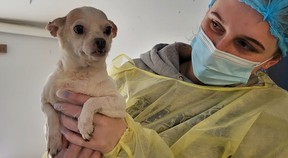 “Nearly all of the cats had been hiding in kitchen cabinets, below the fridge and below furnishings within the sparsely adorned trailer. No water was current for any of the animals. Some dry cat meals had been scattered on the ground, however the meals was contaminated with urine and feces.”

The cats had been very hungry and rushed as much as the officer when meals was provided. However many had been having issue respiratory, a standard downside with animals caught in hoarding conditions.

Three Chihuahuas had been additionally introduced into care which might be being handled for dental illness, hair loss and grooming points, stated Drever.

Anybody who may help out with a donation to offset the price of the animals’ care is requested to go to spca.bc.ca/information.

Bulldog breeding could possibly be banned in UK, in line with senior vets